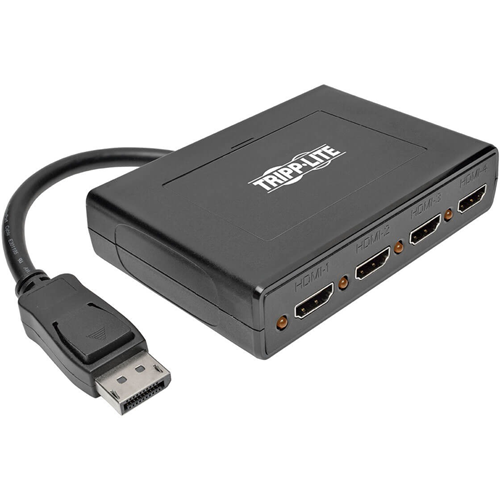 The B156-004-HD-V2 4-Port DisplayPort 1.2 to HDMI MST Hub connects up to four HDMI monitors to the DisplayPort output on your computer. Ideal for digital signage in schools, churches, conference rooms, trade shows, hotels and retail outlets, this hub allows you to display the same image on all four monitors, extend the desktop across them, or combine all four as one large monitor in video wall mode.The B156-004-HD-V2 is compliant with DisplayPort 1.2 and backward compatible with versions 1.1 and 1.1a with the feature set being limited to that of your equipment. It supports high-definition video resolutions up to 1920 x 1080 per monitor. In video wall mode, it supports expanded resolutions, such as 3840 x 2160 (4K x 2K) @ 24/30Hz in a 2 x 2 monitor configuration or 7680 x 1080 in a vertical 4 x 1 configuration.This MST hub also supports HDCP, EDID, DDC and 48-bit Deep Color (16 bits per channel), as well as DTS-HD, Dolby TrueHD and 7.1-channel surround sound audio. It works with all operating systems. Plug-and-play convenience means no software or drivers are needed. A built-in six-inch cable connects directly to a DisplayPort source. LEDs indicate when the monitors are receiving a signal. The B156-004-HD-V2 complies with the Federal Trade Agreements Act (TAA) for GSA Schedule purchases.

We use cookies to give you the best possible experience. By continuing to use the site you agree to our use of cookies.
OK
No, I don’t want to use cookies